A TURBINE IN YOUR HEART, FOREVER SPINNING.

YOU AND YOUR FRIENDS IN ARMOR MADE OF STARLIGHT AND DREAMS, AGAINST THE NASTIEST BASTARDS ENTROPY CAN MUSTER IN A BURNING KNIFE-EDGE DANCE ACROSS INFINITY—

This is INFINITE REVOLUTION.

In Infinite Revolution, you play as a Revolver—a human whose spirit burns so hot, quick, and bright it would reduce their atoms to ash if for not an implanted turbine called a Revolver Drive. A race of entropic predators called the Veil has swallowed most of your system, and now it's time to take it back—for yourself, for your friends, and for everyone back on Earth. They're counting on you.

Battle the scourge of the Veil in high-speed Combat, conduct high-stakes tactical missions in Ops, and do your best to relax in Downtime. Each phase of play is designed to flow into the next for a seamless, well-rounded experience.

Choose from 12 unique Drive Cores based on the Western Zodiac, each with their own powers, combat roles, and consequences, then customize them even further with an arsenal of 30+ powerful Weapons and stylish Focus Arts.

LUMEN by Spencer Campbell is a tried-and-tested SRD focused on fast, flashy action—it's easy to pick up, snappy to play, and still allows for considerable tactical depth, the perfect fit for Infinite Revolution.

The First Flight Edition of IR is feature-complete—it is fully playable and has everything I wanted to fit into the base version of the game. That said, I have plans for a lot more than what you see here—more art, more enemy statblocks, expanded Downtime rules, and maybe even some new Drive Cores. By buying the First Flight Edition, you'll help support the game's development, get the PDF at a discounted price, and are guaranteed all future itch.io editions of the game, no questions asked. I get to pay rent, and you get a kick-ass RPG that gets cooler while you wait! Everyone wins.

If you want to learn more, give feedback, or find people to play with, we now have a discord at https://discord.gg/MNx6d45ykj!

In order to download this RPG you must purchase it at or above the minimum price of $10 USD. You will get access to the following files:

Support this RPG at or above a special price point to receive something exclusive.

Some free copies of IR:FIRST FLIGHT,  on the house. Grab one for any reason, no questions asked. These will periodically refresh pending interest in the game!

My players and I just finished our first session of Infinite Revolution, and everyone is excited to continue.  The writing is delightful, and the systems are clean; thankyou so much for making this.

ah, i'm really glad to hear you've been enjoying the game! thank you for the kind words--hearing other people are actually enjoying this thing i've put out into the world is a big part of why i do this in the first place

mood/thematic inspiration playlists coming soon! for now, here's a song that feels super emblematic of the game to me:

Are any more community copies incoming? This looks incredible but money's a bit tight ATM...

Yes! There will be two more waves of CCs as the game clears more purchase milestones, and we're very close (<10 purchases) to hitting one soon, so stay tuned!

Hey, just wanted to let you know that CCs have just refreshed!

An absolutely incredible game that merges it's descriptions of the emotions and feelings it wants to evoke into the very core of it's gameplay better than anything I have seen so far!!

The sheer amount of joy I had while reading through this and slowly discovering how well it sets itself apart from other minimalistic dice-pool systems was immense, and I can't wait to show this to as many folks interested in tabletop games as possible

high praise! thank you so much, I hope they enjoy it too!

This game oozes with style and offers an impressive array of meaningful options for character customization without feeling difficult to completely comprehend. I recommend this game and look forward to any future editions.

An excellent and vibrant game! I hope a community for it gets developed soon, as I feel an incredible need to play it!

This is amazing!!! Really nicely put together and pleasing to go through.

TL;DR: INFINITE REVOLUTION is awesome. INFINITE REVOLVER is a game about people dressed in godlike exosuits as they scream through space to tear the all-consuming void a new one.  It's also game about being so different from everyone around you but still remaining frighteningly human. You are Revolver, all cylinders firing and no bullets left behind.

Incredible writing. Instantly, Infinite Revolution sucks you in with its vibrant layout, premise and worldbuilding. There is a strong and consistent theme about awakening to yourself, turning differences into empowerment and the value of self-belief. Your character's heart is quite literally kept burning by their hopes, dreams and fears.

Since it's built on the LUMEN system, the game seems well-structured and fairly easy to pick up. You have your standard list of playbooks (all of which are based on zodiacs!), core rules, 'pick approach and roll attribute' system for actions, variable successes/fail-forward hits and modifiers. Creating a session made easier with about three to four pages dedicated to play structure and downtime actions.

Combat is where Infinite Revolution REALLY shines. Since you are quite literally fighting for the fate of humanity at the speed of light, a majority of outcomes in your fights hinge on how much speed you can build up. Aside from your weapons, special powers, passives and BURN SCARS (think of them as a combination of finisher moves, self-sacrificial story beats, character-specific influences on the reality around you and permanent consequences acquired over time) having small influences on your decisions, your speed is always top priority. If you zero out, the fight will end without you in the fraction of a fraction of a second.

There are so many other cool things I could touch on in this game. Like how your weapons have different firing patterns, focuses which completely change their effects and come with an entire list of weapon tags to open completely new options for you. Or how one of the Cores (playbooks) in this game slowly melts your character into pure light to be one with the universe the longer you play. Or how each playbook somehow managed to fit in at least two good paragraphs of narrative text to perfectly capture the vibe and emotions they best encapsulate.

Thank you so much for the in-depth review! I'm delighted you liked the game so much, and really appreciate you taking the time to lay out why.

Thank you for making the game! I tested it solo just last night and read it with some friends. We all got hooked by how well-made it is and plan to play a full game soon.

Oh, do tell me how it goes! Really excited to see it playtested in the wild! 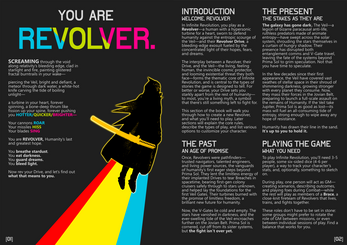 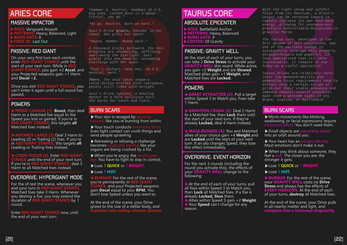 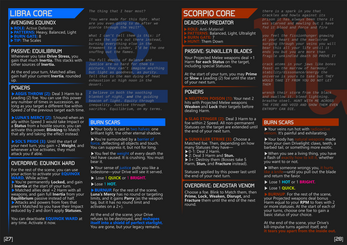